Your government asked to cancel the first Pride march in Georgia's history after radical groups threatened to disrupt the event.

We remind you of your obligation to respect the freedom of expression and assembly of your LGBT+ citizens and we urge you to put all necessary measures in place to ensure a safe and peaceful Tbilisi Pride.

Update – 8 July 2019: Today, the first Pride March in the history of the Eastern European country of Georgia finally happened. In spite of threats by radical groups and lacking the support of the government, local activists were able to bring the rainbow to the streets of Tbilisi, the country's capital city. In the name of more than 28,000 All Out members who signed our petition to keep Tbilisi Pride safe, we congratulate LGBT+ Georgians on this historic moment and send them our solidarity and support.

Update – 21 June 2019: Today, the Tbilisi Pride march, which was originally scheduled for the weekend, has been temporarily postponed to avoid escalating the current political tensions in the country. (Around 240 people were injured during a massive protest against Russia outside Parliament, unrelated to Pride.)

But still, All Out campaigner Yuri Guaiana and our partners at Tbilisi Pride were able to successfully deliver over 28,000 signatures from All Out members to the office of Georgia's Prime Minister. 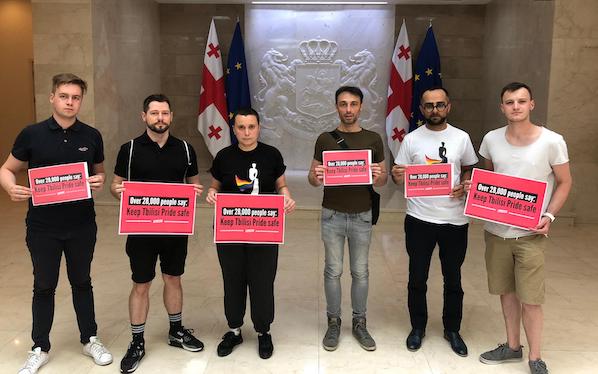 We’ll keep working with our partners to make sure the Pride march can happen safely when it’s rescheduled.

This month, for the first time in history, local activists are planning to celebrate Pride in Tbilisi, the capital city of Georgia in Eastern Europe.

It’s a huge opportunity to show the public that LGBT+ people exist and they demand equal rights, in a country where homophobia and attacks on the community are still commonplace.

After announcing the Pride event, radical hate groups started sending them violent threats. In response, their government is urging Pride organizers to cancel the march and refuses to provide them with any protection.

But Pride Tbilisi isn't backing down!

Instead of giving in to the threats of bullies and thugs, it’s the government’s responsibility to ensure that Pride can happen safely and peacefully.

Help us convince the Prime Minister and the Interior Minister to ensure security during Georgia’s first-ever Pride March.

This campaign is being run in conjunction with Tbilisi Pride and the European Pride Organisers Association (EPOA).