Fundamentalist Christian groups and doctors in Germany say LGBT+ people are sick and need to be "fixed".

There's overwhelming evidence that these practices can be extremely traumatising.

We ask you to stop these groups from harming more people and to ban dangerous "conversion therapies" in Germany NOW.

UPDATE: 14 May 2020: One year ago, in April 2019, the alliance #HomoBrauchtKeineKeineHeilung handed over more than 110,000 signatures to German Minister of Health Jens Spahn.

Thousands of All Out members, the Alliance against Homophobia (Aktionsbündnis gegen Homophobie), Travestie für Deutschland, Enough is Enough and Lucas Hawrylak with Change.org jointly called for an end to so-called "conversion therapies" in Germany.

Thanks to this pressure, a bill was brought to the table. And one year later the law has finally been passed. On 7 May 2020, the German Bundestag agreed to a partial ban.

During the voting process, we continued to work together to get important amendments to the draft. A dangerous exemption for young people between the ages of 16 and 18 was dropped from the draft.

Unfortunately, not all recommendations from experts from civil society and associations of those affected were included in the law on protection from "conversion therapies". The law still does not call for penalties for parents who place their lesbian, gay, bi or trans children in "treatment". According to the legislator, they are not necessarily in breach of their duty of care.

Thanks to everyone who supported our campaign.

UPDATE: 18. December 2019: Good news at the end of the year: the German government is fighting back against self-proclaimed "homo healers" and has introduced a draft law to partially ban so-called "conversion therapies". The law is expected to come into force in the middle of next year.

Over 110,000 people supported our alliance #HomoBrauchtKeineHeilung with their signatures to put pressure on minister of health Jens Spahn - with success!

Together with our partners, Alliance Against Homophobia, ENOUGH is ENOUGH - OPEN YOUR MOUTH, Lucas Hawrylak, Change.org and Travestie für Deutschland, we will continue to push for the ban to become even more comprehensive - so that these dangerous practices are history once and for all. 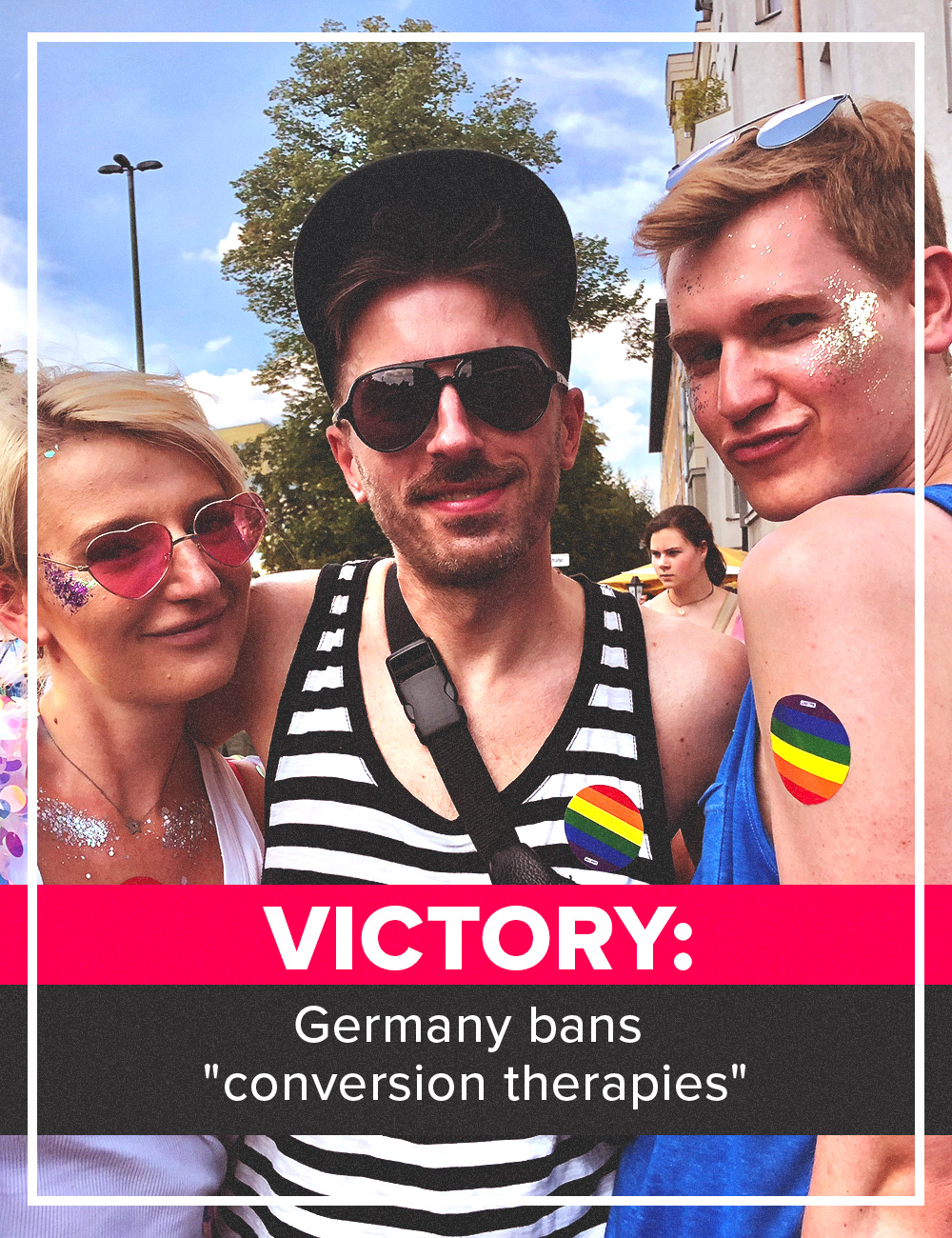 UPDATE: 4 November 2019: The Federal Minister of Health, Jens Spahn, has presented a bill that would prohibitso-called conversion therapies. The bill is due to be voted on in the cabinet by the end of the year.

The ban would apply to people under 18 years old and to individuals with a "lack of informed decision making power" or that are influenced by deception, error, coercion or threat.

However, the draft was criticized for the dangerous exception made for people between 16-18 year-old, for whom the ban would not apply in cases where practitioners could demonstrate that patients have the necessary insight into the meaning and scope of the treatment.

The draft bill also includes the prohibition of public advertising and procurement for so-called conversion therapies, as well as penalties of up to EUR 30,000 for violations and up to one year imprisonment for carrying out such so-called treatments on minors.

In addition, a multilingual advice service will be set up for people who have been subject to so-called conversion therapies and for people who work with LGBT+ populations. 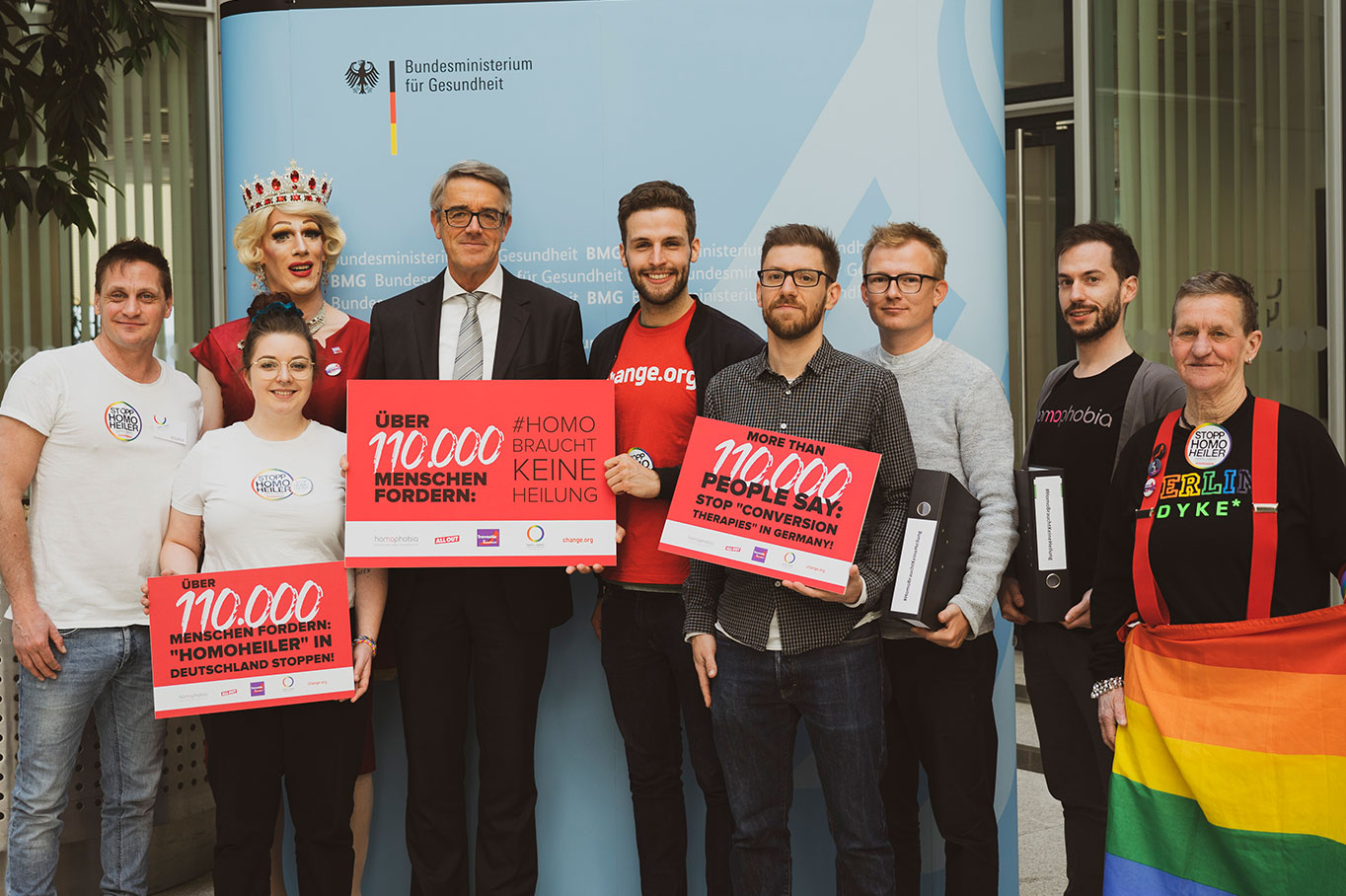 UPDATE - 10 April 2019: This is huge: A day after we delivered more than 110,000 signatures asking to end "conversion therapies" in Germany, Minister of Health Jens Spahn announced he's launching a commission to work on a ban!

We'll continue working closely with our partners Aktionsbündnis gegen Homophobie, ENOUGH is ENOUGH - OPEN YOUR MOUTH, Lucas Hawrylak, Change.org, and Travestie für Deutschland to make sure these dangerous practices are banned once and for all.

UPDATE - 22 February 2019: German Minister of Health Jens Spahn has publicly demanded a ban of "conversion therapies" in Germany. In the past, Spahn had remained mostly silent on the issue but said he doubted a ban was realistic. In an interview with German newspaper taz, he now says: "Homosexuality is not a sickness and therefore does not need to be cured. That's why I support a ban of 'conversion therapies'". Minister of Justice Katarina Barley joined this call and said she's in touch with Spahn to explore how a ban can be moved forward.

We need to make sure these words are turned into action. For this, we'll need your support. We're planning to deliver the signatures soon, so please continue to sign and share the petition.

In other news, we co-organised a movie premiere of Boy Erased in Berlin last week with German activists. After the movie screening, a group of activists, psychologists, and a young man who underwent a "conversion therapy" discussed the issue. The event was picked up by a lot of German media outlets, helping to bring more public attention to dangerous "conversion therapies". 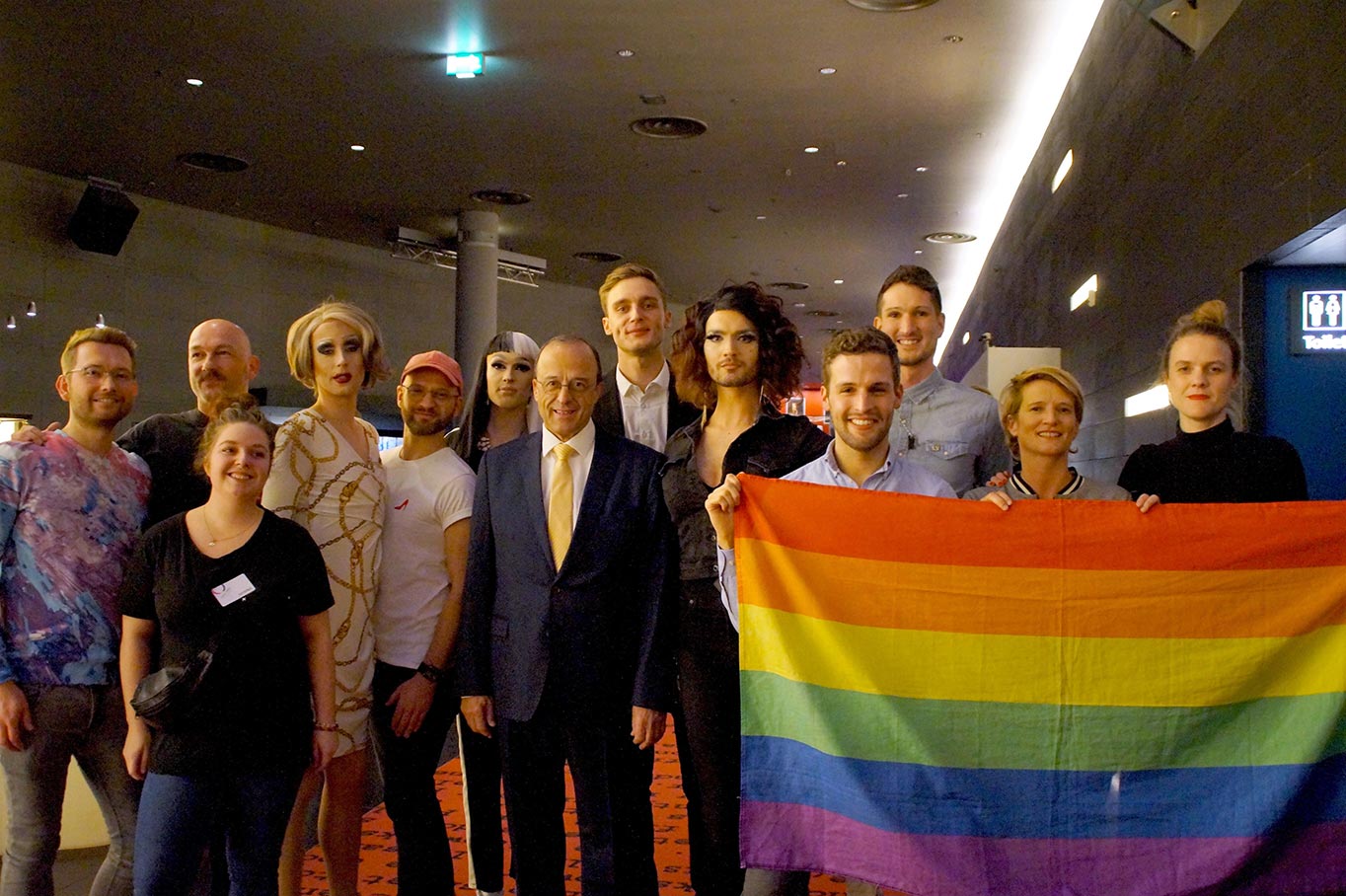 Participants at the Boy Erased movie premiere in Berlin. Photo by Annett Audehm.

A group of fundamentalist Christians in Germany is offering seminars and therapies claiming they can "fix" lesbian, gay, bisexual, and transgender people.

According to a recent media report, the Association for Life Orientation (LEO) has been regularly running seminars where LGBT+ people are told they have "mental disorders".

And LEO is just the tip of the iceberg: dangerous "conversion therapies" - sometimes also referred to as gay "cures" - are hurting people all over Germany.

German Minister of Health, Jens Spahn, is an openly gay man himself – and has the power to actually stop this.

The recent report on LEO's activities has put this crisis on the radar. If thousands of us speak out, we can push Minister Spahn to take action and help ban "conversion therapies" in Germany once and for all.

This campaign is being run with Aktionsbündnis gegen Homophobie e.V and ENOUGH is ENOUGH! OPEN YOUR MOUTH!.