You will soon decide if Congress must approve a law to protect LGBT+ Brazilians from discrimination and if sexual orientation and gender identity should be included in the existing law that prohibits discrimination based on race, ethnicity, nationality, and religion.

We ask you to stand with LGBT+ Brazilians again, as you've done more than once in the past, to protect them from hate and violence.

UPDATE – 13 June 2019: VICTORY! The trial came to an end today and with a majority of votes, the Brazilian Supreme Court has decided that LGBT+ people must have legal protection against discrimination. The Court decided that the Brazilian Congress must pass a new law (or alter an existing one) to guarantee protection for LGBT+ people. Until that happens, LGBT+ people will be protected by the same law that protects Brazilians from racism, religious intolerance, and xenophobia.

UPDATE – 23 May 2019: Big news: the Supreme Court reached a majority position today on making discrimination against LGBT+ people a crime in Brazil. The case isn’t over, but the majority is already in place. The trial will resume on June 13 – and we'll be there!

UPDATE – 21 February 2019: After four days of discussions (and four votes in favor of criminalization!), the Supreme Court decided to put the trial on hold – they're resuming it on May 23.

UPDATE – 14 November 2018: Brazil's Supreme Court has postponed today's hearing to February 13. And yesterday, we delivered more than 210,000 signatures to the Court, asking them to protect LGBT+ Brazilians. 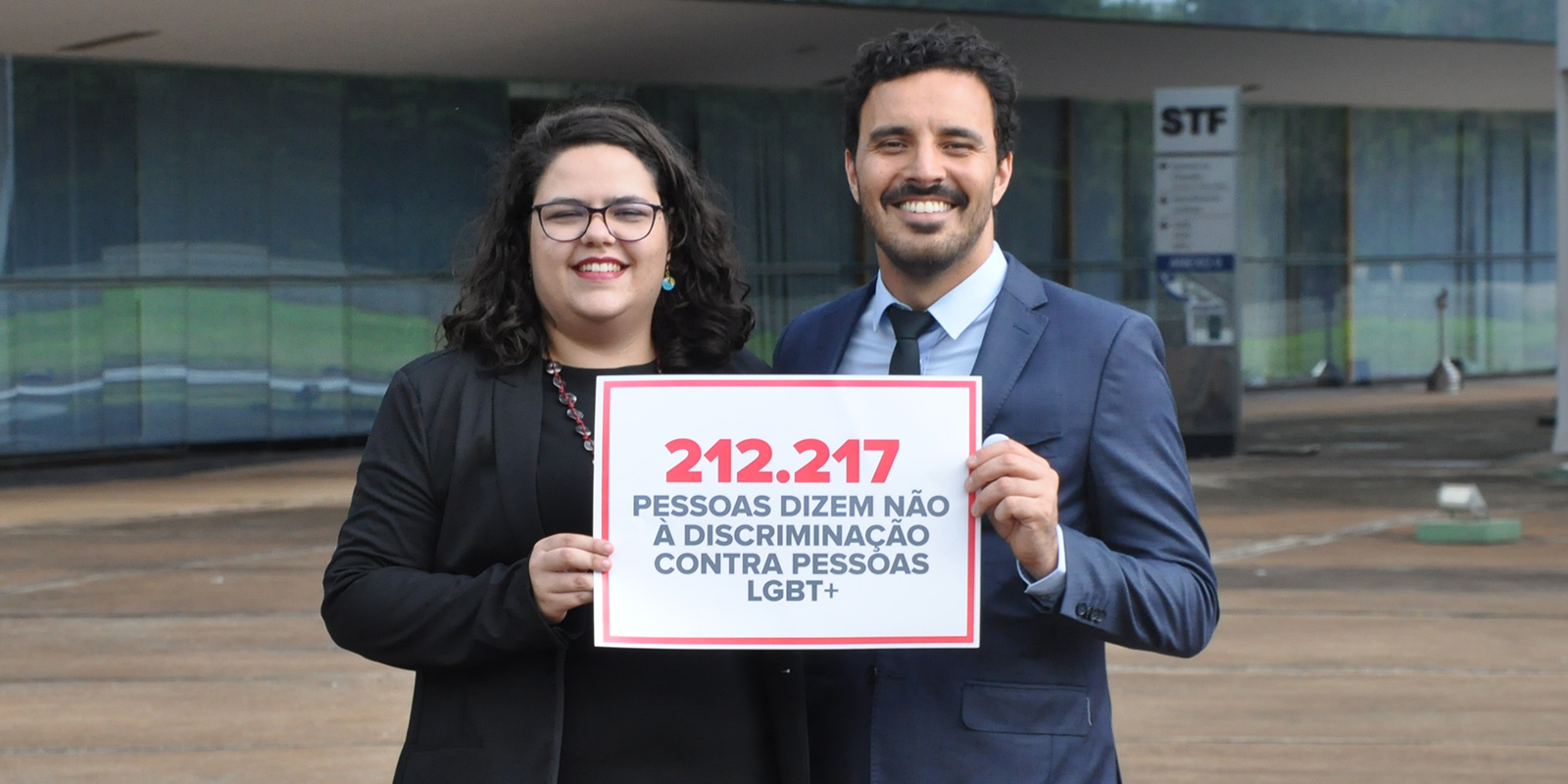 Ana and Leandro, All Out staff in Brazil, stand front of Brazil's Supreme Court.
The sign says "212,217 people say no to discrimination against LGBT+ people", in Portuguese.

Brazil recently elected Jair Bolsonaro as their next President. This is a man who once said he "would rather have a dead son, than a gay one."

During the election, Bolsonaro's supporters started to feel empowered by the hate and division promoted by his campaign and violence against LGBT+ people and other minorities escalated across the country. Two women were murdered and one beaten, just for being trans. A man was murdered in his apartment for being gay. Many others were verbally and physically attacked by Bolsonaro supporters.

But, before Bolsonaro takes office in January, there's a major opportunity to make it much harder for this hate to harm LGBT+ Brazilians.

On 14 November, Brazil's Supreme Court will decide if discrimination against LGBT+ people should be a crime in the country. All Out is mobilising people in and outside of Brazil to show the Supreme Court that the entire world is looking to them to do the right thing.

Will you add your name and call on Brazil's Supreme Court to protect LGBT+ Brazilians?

This campaign is being run in conjunction with ABGLT, GADvS, and Beta.